You may have seen ‘1917’, a visual immersion in the hell of the Great War. The novel ‘Nursing Fox’ also takes you into that rain of death, and in particular, the struggle to save the wounded on the front line.

Jim Ditchfield’s novel is a homage to the women who served as nurses on the Western Front. He says, ‘Although they performed a crucial role, the nurses of the Australian Army Nursing Service are rarely mentioned in accounts of that conflict’. I feel well read about that war but until now I did not know about the conditions these nurses had to endure. The Casualty Clearing Stations (CCS) had to be close to the trenches to give the wounded the best chance of survival. That meant the doctors, nurses and patients got regularly shelled and bombed.

We follow the fortunes of Lucy Paignton-Fox who has been raised on a cattle station in the Northern Territory. She has studied for what was in 1914 for women an extraordinary chance to train as a doctor. But when Australia follows Britain into the war in Europe, Lucy volunteers to be an army nurse. 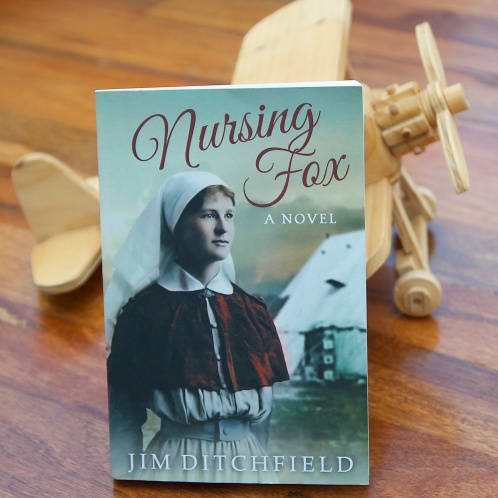 The nurses work until exhausted and then keep on working. The wounded stream in from ‘stunts’ (battles) the names of which are are engraved on war memorials: The Somme, Fromelles, Pozieres, Ypres, Messines, the Menin Road, Passchendaele. Each name represents astonishing numbers of mangled humans.

‘There were only 41 men still fighting fit, four walking wounded, one who needed a stretcher. Just 41. The company had been 250 strong when the stunt started’. P.120 John Mitchell reviews his shattered company.

We are also introduced to John Mitchell of the AIF (Australian Imperial Force) and to Adam Haywood (Royal Flying Corps), Through their eyes we see the fighting on the ground and in the air. We are taken through the frentic disorganisation of things as basic as getting fed, getting the hospital tents set up, and moving about on the shattered ‘roads’ (planks laid over mud). As readers we get to know as little of the ruthless decisions being made by the base-wallahs (staff officers) as do the troops and nurses. But we see the results in the plethora of grim details. As well as the human toll, the author reminds us of the transport horses and mules killed by artillery or worked to exhaustion. There is no blaze of glory anywhere, just the endurance of the unbearable by men and women at a time when the best anyone could hope for was a ‘ticket to blighty’ (a wound so bad they’ll be sent to England.)

For a gripping account of the service of the nurses in France, and for a carefully researched and engrossing picture of how awful was ‘The War To End All Wars’ for everyone, I highly recommend Nursing Fox.

Where to find Nursing Fox: From publisher Odyssey Books , from BookDepository (with free shipping worldwide) and from Amazon in softcover and Kindle, Barnes and Noble in soft cover Nook, Chapters Indigo, Booktopia, and Waterstones. Or, ask your friendly local bookstore to order it in for you.
Personal Note: One battle name in particular gave me an irrational start: The Menin Road. As a child in New Zealand I lived on a quiet suburban street called Menin Road. The streets all around bore names which I later learnt to be battles of that terrible war. It’s curious to think that as I played games on the neat lawns I had no idea across the other side of the world so many thousands had died by the original Menin Road that their number will never be known.

Mark is guardian and blundering typist for Mawson, one of this bright world’s few published bears.

This site uses Akismet to reduce spam. Learn how your comment data is processed.

Experience your identity and calling through true events

A way towards me, myself and my dreams!!☺️

Adventures and philosophies of a straw stuffed toy

Life in Copenhagen, Denmark, after moving during Covid-19.

Silver Birch was a spirit guide who spoke through Maurice Barbanell （1902-1981）, founder and editor of the Psychic News of London , England

An opinionated girl penning down her thoughts.🌸❤