Imagine a landscape more forbidding than Central Australia, the Sahara, the Atacana desert. A landscape still shifting with the after shocks of a cataclysmic event that, 197 years before The Pale begins, destroyed most species. Clare Rhoden quickly establishes this ghastly world in our minds. At the same time she moves the narrative along with fascinating characters to care about.

‘How does anything live out there?’ Tad murmured.

Serviceman Tad patrols the Pale, the last place left that bears any resemblance to a city. Within the walls exist – you can hardly say ‘live’ – a hierarchical society of citizens who, like Tad, are partly liveware (tissue) and partly hardware. The Pale has wholly adopted technology and rationality as its survival mechanism. Subservience by the citizens to the poli-cosmos is the order of the day. (I think it no accident that the author’s use of ‘policosmos’ without a hyphen somehow gives it an overtone of ‘police state’.) Even so, there are unsettling signs in at least two Servicemen, Tad and his protégé Hector, of the Pre-catalcym human trait deemed most dangerous: empathy. The story of how this ‘weakness’ affects the Pale could have made a good novel in itself, I think, but Clare Rhoden interweaves it with so much more. 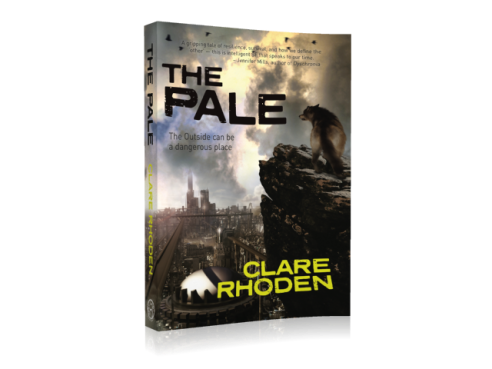 Outside the Pale, somehow life clings on. Here subsist the humans (fully liveware) of the Settlement. In their zeal to live up to Pre-cataclysmic ideals they have turned to biology. Strict breeding protocols result in a caste system. Beyond the Settlement roam Tribes. Some tribespeople have close bonds with the packs of Canini, wolf-like creatures. I defy any reader to not be fascinated by the Canini. Their codes and imperatives also serve as a contrast with the humans. All living things fear the Ferals, hybrids of biology and machine, a nightmare offspring of the former technological world. These scour the plains hunting biofuel i.e. flesh.

I particularly liked the depiction of how the mentality, society and even biology of humans could evolve to accomodate the need to survive and also to try to eliminate the weaknesses and disasters of Pre-Cataclysm humanity. In some dystopian stories all we really see, I think, is the last angry male humans mindlessly fighting each other to the last club and bullet. Here, to my relief, and I’m sure yours too, we have leaders, mostly female, relying on mutual respect, discussion, and the cross seeding of ideas between groups. This intelligent and thought provoking series looks at how the best attributes of we humans, empathy, hope, kindness, can have the power to lift us above struggle and misery.

Clare Rhoden’s website gives us more information about the Chronicles of the Pale ( The Pale, Broad Plain Darkening and The Ruined Land ) and  her other work.

Where to find The Chronicles of the Pale : From publisher Odyssey Books ,
From BookDepository (free shipping worldwide): The Pale, Broad Plain Darkening and The Ruined Land.
From Amazon in Kindle and softcover. Also from AbeBooks.com.
Or, ask your friendly local bookstore to order the series in for you, My tip: order them all at once because you’re going to want to keep on reading.

*The images and graphics you see here are copyright and courtesy of the publisher Odyssey Books .

Mark is guardian and blundering typist for Mawson, one of this bright world’s few published bears.